This year, we’re spending Christmas in Niš. But, in light of the climate crisis, I wanted to avoid flying there. I started thinking about how we could get there by train, bus, or car, and what we could do along the way. Since Christmas comes later in Serbia, I thought maybe this would be a great opportunity to get my Christmas fix, by stopping at Christmas markets along the way. A trip idea was born!

Of course, to make it happen, we’d have to deal with some long and early train rides. We woke up yesterday at 5:05am to get to the train station and eat breakfast (oats) before getting on the 6:25 train to our first stop – Vienna!

The direct train to Vienna is pretty comfortable and the six hours don’t seem so bad when you’ve got good company and, more importantly, WiFi!

We arrived in Vienna just before 1 and made our way to Stadtwirt, a restaurant that looked good and was on the subway line to our airbnb. 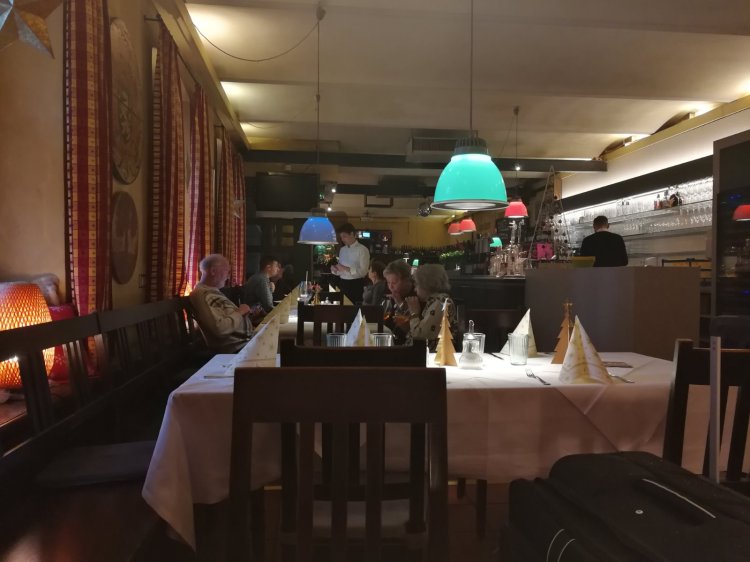 It turned out to be a good find. The food was really delicious. I had Backhendl, which is basically chicken breaded and fried in the style of a Schnitzel. I really liked it. Jelena had Tafelspitz, a kind of boiled meat. (not my thing!)

After we were done enjoying that, we had some time to kill until we could check in. Temptation sunk in its claws and we ordered a sweet pancake (Palatschinke).

It was just one to share, a little treat after a good lunch! We paid the bill and then popped over to a supermarket across the street to buy some sausages for Jelena’s dad.

Sadly, it had been raining since before we arrived and there were no signs of it letting up. We jumped back into the subway and headed for Stephansplatz, where our airbnb was.

The airbnb turned out to be more of a cheap hostel with private rooms. Everyone shared one bathroom and the walls weren’t overly thick, nor were the rooms very big. The heating and window situation were not great either. Still, the location was good and the price was right – plus, we’d be leaving in less than 24 hours.

Our next plan was to head to our favourite cafe, Tirolerhof. It was only 300m away and, given the downpour, this was a very good thing. After a short rest in the room, we moved on to the next treat!

Jelena had a tea and I had a hot chocolate. We shared Kaiserschmarrn. The great thing about Viennese cafes is there’s no rush – and we were not in one!

Jelena grabbed a newspaper and I read the news on my phone. We were also in a prime position to spy on people throughout the cafe.

Eventually, we got too sleepy to remain seated and decided to move on to the final phase of our stop in Vienna – the Christmas markets. Unfortunately, it turned out to be a total bust – the rain had gotten worse. We bravely pressed on to the Karlsdom and got thoroughly soaked in the process. Defeated, we took shelter in the subway and headed home.

Well, there will be more Christmas markets ahead and hopefully less rain.

We finished the evening with some salads from a place called Health Kitchen. They turned out to be really good. While I was waiting for the takeout, the guy even offered me free water, which blew my mind – in Germany, they don’t ever give you free water, even if you’re eating there and spending a lot. I love Austria!

Now we are on the way to Slovenia, home of the world’s most famous gold digger, Melania Trump. Its capital, Ljubljana, is supposed to be very beautiful and it will be a first time visiting for both of us!