Despite getting in late last night, we woke up early this morning to hit the streets of Paris for a lightning tour. Of course, we started with amazing croissants!

It was a lot of pressure to both plan a good route for someone who has never been to Paris and to keep us on track, so we didn’t miss our 10:37 train to Marseille. Although it took us a few minutes out of the way, I planned in a quick stop by the mini Statue of Liberty, bringing us full circle back to our New York trip.

Oh yeah and we cycled through the traffic circle around the Arc de Triomphe and lived to tell the tale. Probably getting there early was important to our survival chances.

Cycling in Paris is intense – you’ve got to pay attention at all times – but it’s overall quite good, since there are many bike lanes, including fully separated bike lanes, something Germany doesn’t have much of. This is a biking country. How does this Metropolis do it but Toronto can’t?

Anyhow, we stopped by the supermarket to grab some great butter, cheese, and salami – also raspberries for the vitamins and fibre – and managed to make it with just enough time to the train. 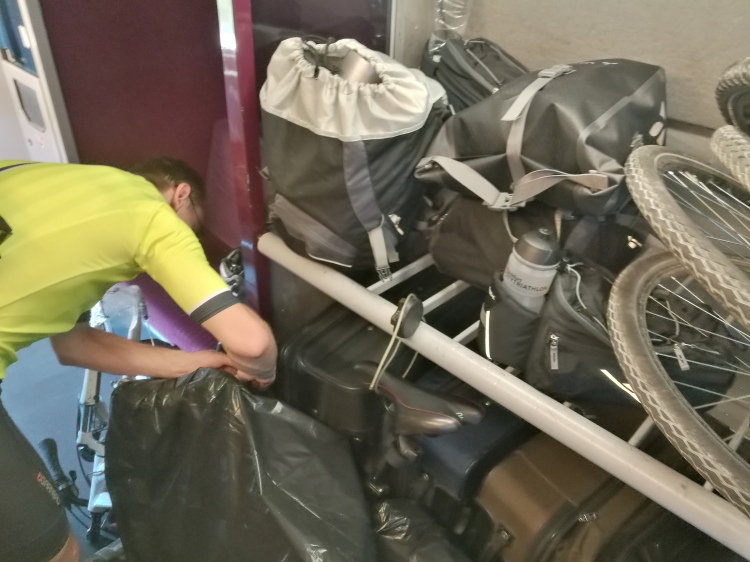 It was an effort getting everything in the train – not as smooth as in Frankfurt – but we did it. The train conductor insisted we put the bikes in bags, though. Good thing we came prepared with garbage bags!

Lunch was insanely delicious and not even expensive. It’s great to be in a country that values good food, rather than Preis-leistungs-verhältnis.

Of course, I recorded the Paris journey and will be live tracking future ones. Looking forward to getting on the bike in Marseille. We’ve got about 85km ahead of us. Let’s get the party started.